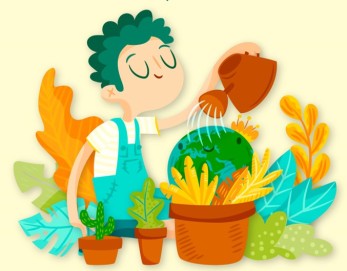 Check out this updated list of totally free Earth Day presentations stories, videos, coloring pages and activities for kids of all ages.

Courtesy of My Wonder Studio.

If you’ve ever felt like your whole life has been uprooted, take heart from the Turner’s Oak—a 16-meter-tall giant planted in 1798 and now thriving in the Royal Botanic Kew Gardens, just south of London. In the 1980s, it was sickly and looked like it might die. Then on the 16th of October, 1987, the Great Storm hit parts of the United Kingdom, France, and the Channel Islands. It may have been the worst storm to hit since 1703 and knocked over 15 million trees in the south of England in just one hour. Among its victims was the Turner’s Oak. The wind lifted the tree by its shallow root plate completely out of the ground, violently shook it, and then set it back down again like a giant hand lifting a wine glass up by its stem and then plopping it back on the table.

The head of the arboretum, Tony Kirkham, felt like he had lost a family member: “I was devastated! Trees that you’ve been looking after, that you’ve grown to recognize and be familiar with were lying on the ground.” Tony and his fellow arborists pushed the mighty oak back in place and propped it up without much hope.

Three years later, to their amazement, the tree was a picture of health. That was when they realized that the soil around the roots had become so compacted from people walking on it that the tree wasn’t getting enough air and water. The storm shook the tree loose and gave the soil the needed porosity which enabled the oak to thrive once more.

In the 30-odd years since the storm, the Turner’s Oak has grown by a third and has inspired new methods of tree management around the globe, including equipment designed to break up the soil and enable oxygen, nitrogen, and nutrients to reach the trees’ underground root systems.

When we’re in the middle of the hurricane, we may not understand what good could possibly come from it, but when the storm breaks, new life returns. Often, we don’t know the whys and wherefores of our troubles when we’re in the midst of them, and we “can’t see the forest for the trees.” But it’s in trusting in God’s good purposes in our lives that we find rest and peace of mind.