Sir Ernest Shackleton, the famous Antarctic explorer, once described how, one night, in an emergency hut, he and his men were trying to sleep, having just rationed out the last biscuits. The situation was dire, and no one there could be sure he’d make it back to civilization.

Shackleton sensed a movement and saw one of the men turning to see how the others were faring. He obviously thought that everyone else was asleep, so he stretched over his neighbor and took his biscuit bag. Shackleton was dumbfounded. He thought he could have trusted this man with his life. Now he was stealing a man’s last biscuit. Had the pressure turned him into a thief?

Then he saw him move again. He removed the biscuit from his own bag, put both biscuits into the other man’s bag, and quietly returned the bag to his sleeping friend’s side. Shackleton said, “I dare not tell you that man’s name. I felt that act was a secret between himself and God.”

What would you be willing to do to show love to those around you?

Greater love has no man than this, that a man lay down his life for his friends – Jesus (John 15:13) 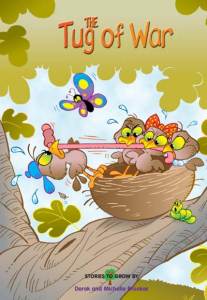 Tug of War is the first book in the “Stories to Grow By” series that is now available as a free ebook! Click here to download this children’s story in either epub or mobi format or go here to read/download the .pdf version. (Bilingual English/Spanish)

Story courtesy of My Wonder Studio. Click here to read the story in English.

Click here to read this entertaining children’s story in English.

Click here to see this cute children’s story in English. (Story courtesy of My Wonder Studio; used with permission.)

A Christmas story for children of all ages, in English and Spanish.


View this document on Scribd