If Thomas could tell us what he experienced when Jesus was crucified, buried, and rose from the grave, I think it might go something like this. …

After Jesus was crucified and His body was laid to rest, we all went into hiding for fear that His enemies would come after us next. I spent the third day alone, wrestling with my mind about what had happened to Jesus.

When I saw the others again that evening, I found that a lot had happened in my absence. Everyone started talking about it at the same time. “We have seen Jesus!” “He’s alive!” “It’s true! It really is!” “I saw Him, too!”

Peter took charge and tried to help me understand. “We were huddled here, still trying to make sense out of what happened to the Master, when Mary came to the door out of breath. …”

“We had gone to the tomb to anoint His body with spices,” Mary blurted out, “but when we got there, the stone was rolled away from the opening and His body was gone!”

“We thought it was just a wild story,” Peter continued. “But when she kept insisting that we go and see for ourselves, John and I did. And we found it just as she had said—empty except for the shroud His body was wrapped in. On the way back here, I remembered how He had said, ‘Just as the prophet Jonas was three days in the whale’s belly, so must the Son of Man be three days and nights in the heart of the earth,’ and I began to wonder if maybe Jesus had risen from the dead.”

Peter’s voice rose with excitement. “Then the most amazing thing happened! Just a short while ago, all of a sudden Jesus was standing right where you are standing now. He showed us the nail holes in His hands and the spear wound in His side…”

My doubts drowned out the rest. Impossible! 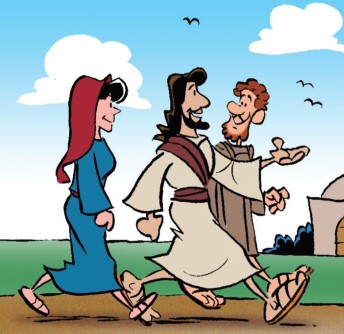 My attention came back into focus as two others related an equally incredible story about meeting a mysterious stranger on the road to Emmaus. Cleopas spoke for them.

“We were here when Mary came and said that she and the other women had found His tomb empty and seen an angel who told them that Jesus was alive again. The two of us left for Emmaus, as sad and confused as you are about what had happened to Jesus. On the way we met a man who explained the prophecies in the Bible concerning the Messiah’s death, and the prophecies all fit Jesus exactly! Suddenly we realized that the stranger was Jesus, and in that same instant, He vanished!”

Had everyone gone crazy? “I don’t believe it!” I blurted out. “I think you all are imagining things—seeing what you want to see.” I pled with them to be more rational. “I loved Him as much as you did. Don’t you see how ridiculous this is? As for me, I would have to see and touch the nail holes in His hands and the wound in His side before I will believe!”

Eight days later, we were all gathered again. Suddenly, a figure walked right through the wall—and I wasn’t imagining it either! It was Jesus! He came straight to me, smiled, and pointed to the wounds in His hands. “Thomas, put your finger here,” He said. I could tell by the tone of His voice that He was disappointed because of my doubts, but patient and understanding.

My words from the week before rushed through my mind, and I felt ashamed. He hadn’t been there when I had told the others that I wouldn’t believe until I saw and touched Him myself, but He knew. Ever since I had met Him, it seemed He always knew my deepest thoughts and feelings.

He took my hand and said, “Thrust your finger into the spear wound in My side and believe.”

I did, and in that instant any lingering doubts I may have had vanished. I had seen. I had felt. But more wonderful still, I had looked into His eyes—eyes filled with more love and compassion than I’d ever seen there before. His love for me hadn’t been diminished one iota by my skepticism. I was ashamed of my unbelief, but His love washed away both my doubts and my shame.

As I fell to my knees, I blubbered, “My Lord and my God!”

Yes, I was blessed to have been in His presence, to have heard Him teach, to have watched Him do miracles, and to have heard Him call me by name. I was blessed to see and touch the risen Savior, to be reassured of His love for me, and to hear from His own lips that all my sins were forgiven. But you are even more blessed. As He said, “More blessed are those who have not seen and yet believed.”

Will you believe? Just open your heart and say, “Jesus, I receive You as my Lord and my Savior. Please fill me with Your Spirit and life. Amen.”