Jack sank deeper into his seat in the cold train carriage and pulled his hat down over his ears. He and his fellow passengers had been stranded there for several hours already. The steam locomotive and the lead carriage of the overnight express train had jumped the tracks halfway between hell and nowhere. Now all they could do was wait until help arrived. It was the middle of winter, and the dead of night. No power, no heat, and no light except for a few flashlights that the conductor and some passengers had.

Jack knew it was going to take a while before the alarm was raised somewhere up the line when they realized that the express was not on schedule. Search parties would have to be mobilized and sent out with some caution. A train could be dispatched up the single spur line in the other direction, but that would be risky, as they could find themselves traveling head on into the delayed express traveling from the other direction. The signal system on this part of the track was antiquated, as Jack, a train aficionado, knew. The real search, he concluded, would not begin until dawn.

The train had come to a jerking halt. The steam locomotive and the lead carriage were off the track and had plowed into a thick gravel embankment. Both were upright, and miraculously no one was killed, although the engineer and fireman had sustained nasty head injuries. They had been carried back to one of the carriages to endure the freezing night with their passengers, several of whom had also been hurt. It was frustrating and scary to know that they were out there with little chance of rescue till daylight.

“We sang all night,” recalled Jack. “We didn’t care what the song was. We sang popular songs, old music hall numbers, hymns, even Christmas carols. As long as we kept singing, it kept our spirits up. People from other carriages came up and we all crowded in to keep warm. Most of us were strangers to one another, but we all became comrades in disaster, lifting one another’s spirits.

“It was a mixed bunch, from young army recruits returning to camp from leave, to young families and a few old-timers, even some guys I wouldn’t normally want to be around on a dark night. But somehow the social barriers all came down. 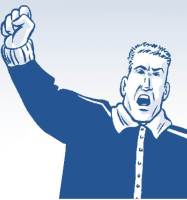 I initially heard one enormous fellow—Clifford was his name, I learned—let off such a stream of cursing when the accident first occurred that it probably equaled all the other swearing and blasphemy that I had heard in my life until then. But he was the fellow that scooped up the engineer in his arms, carried him back to the carriage, and hovered about him like a cross between an angel and a nurse for the rest of the night. If I’ve met anyone in my life that was a rough diamond, it was Clifford.

“I’ve been guilty many times of judging books by their covers, but in this fellow’s case I was wrong—and probably have been many other times. It was the most incredible night of my life in many ways, and I made fast friends with many who were there. I was almost sorry when the rescue teams located us early the next morning.”

On that miserable night, stranded in the middle of nowhere, Jack and his fellow passengers forged a lifetime of friendships. Clifford became an orderly at a hospital and then joined the Saint John Ambulance Brigade. Seems he had only been out of jail a few weeks before the wreck and was traveling that night to settle a few scores with some erstwhile “friends.” “That wreck stopped me from making a wreck out of my life,” he told Jack several years later.

Jack gained an outstanding lesson that night that never left him: Our darkest experiences can sometimes turn out to be our best and can forge the greatest friendships.